So mightily grew the word of God and prevailed. 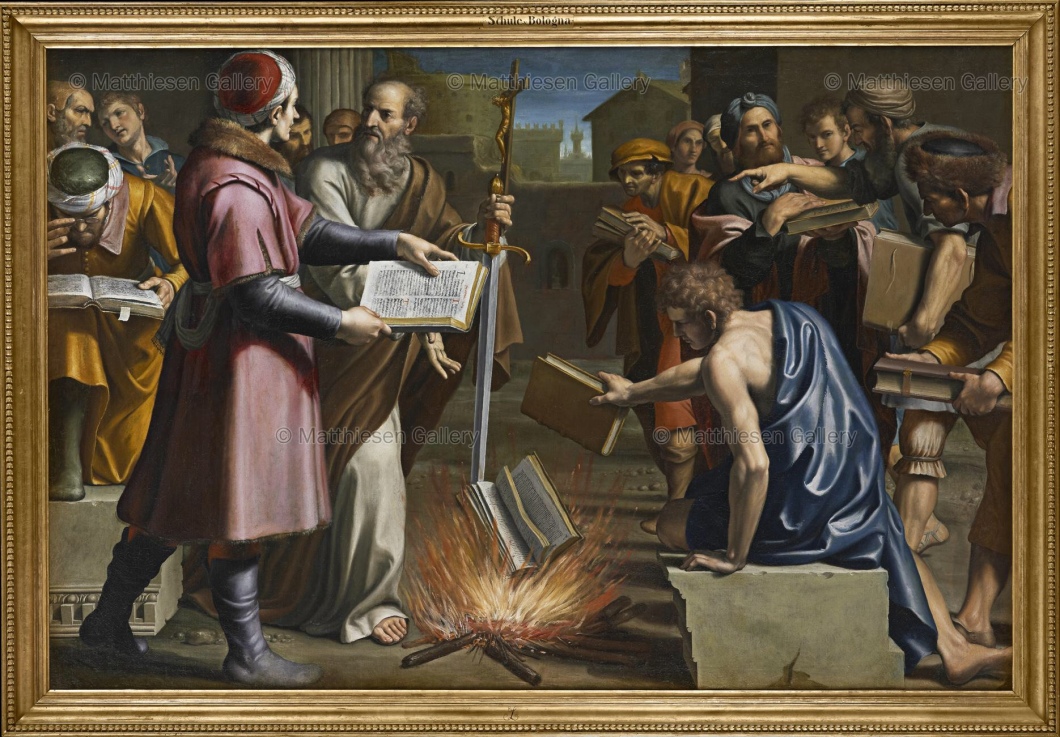 “And this was known to all the Jews and Greeks also dwelling at Ephesus; and fear fell on them all, and the name of the Lord Jesus was magnified.

And many that believed came, and confessed, and shewed their deeds.

Many of them also which used curious arts brought their books together, and burned them before all men: and they counted the price of them, and found it fifty thousand pieces of silver.

So mightily grew the word of God and prevailed.”

“All of the people in Ephesus were awestruck, both Jews and non-Jews, when they heard about what had happened.

Great fear fell over the entire city, and the authority of the name of Jesus was exalted.

Many believers publicly confessed their sins and disclosed their secrets.

Large numbers of those who had been practicing magic took all of their books and scrolls of spells and incantations and publicly burned them.

When the value of all the books and scrolls was calculated, it all came to several million dollars.

The power of God caused the word to spread, and the people were greatly impacted.”

SAINT PAUL AND THE BURNING OF PAGAN BOOKS AT EPHESUS

Saint Paul and the burning of pagan books at Ephesus

The attribution to Lucio Massari was first suggested by both Dr. Erich Schleier and Dr. Stephen Pepper, and was subsequently confirmed by Professor Alessandro Brogi. An artist of considerable reputation in his own time, Massari  like so many other artists of the early baroque in Emilia-Romagna  has only recently been rediscovered by scholars.

The subject, taken from the Acts of the Apostles (19: 18-20), illustrates an episode from Saint Pauls mission to Ephesus, when after hearing Pauls testimony, the now converted magicians of Ephesus are compelled to come forward and burn their magic texts. Paul is shown to the left of centre, where (still apparently preaching to the converted) he plants his sword and crucifix into the fire. The Ephesians gather to left and right in orderly groups to consign their pagan books to the flames in proof of their allegiance to the new faith: ‘A number who had practised sorcery brought their scrolls together and burned them publicly. When they calculated the value of the scrolls, the total came to fifty thousand drachmas. So mightily grew the word of God and prevailed’. Massari illustrates this rather severe subject, one which was particularly popular during the Counter Reformation (possibly in some part due to Clement VIIIs relish for biblioclasm) with a calm intellectualism (several of the magicians appear to be reviewing or debating their texts one last time before destroying them), and a sense of formal symmetry and suspended animation that almost recalls the classicism of Raphael, albeit without the latters spatial clarity. Massari has also attempted to capture something of the exotic character of Ephesus. The figures are variously clothed in eastern costumes or in classical dress, and this juxtaposition of past and present is repeated by the fragments of antiquity strewn in the foreground, in contrast to the urban setting of the background, where, framed by classical columns, can be seen various structures that recall the Castel SantAngelo and the Palazzo Vecchio.

Brogi dates the work to around, or just after 1612, when, during his return to Bologna after a formative trip to Rome, Massari stopped in Galluzzo outside Florence. There, he completed the fresco decorations in the chapel of the Certosa di Galluzzo, which were begun by Bernardino Poccetti, but left unfinished upon his death in October of that same year. Possible Florentine influence can also be seen in Massaris monumental figure types and blanket-like approach to drapery, where one can detect the influence of artists such as Lodovico Cardi, il Cigoli or Jacopo da Empoli, such as in the pose of the foreground figure holding an open book, and that of the seated figure at bending over the fire.

Equally, during Massaris period in Rome, he had become friends with the young Domenichino, and the latters legacy from Annibale appears to have also influenced Massaris frescoes in Galluzzo. Brogi has pointed out that the present work exhibits the same archaic classicism found in these frescoes. However, it is also possible that Massari may have been inspired in his approach to the subject by an altarpiece by Bartolomeo Passarotti which depicts another scene of righteous book-burning, his Saint Dominic and the Albigensians, which was originally painted for the Confraternity of Saint Dominic in Bologna, and now in the Pinocoteca Nazionale.

Massari was born in Bologna, in the parish of S. Proculo, where he initially apprenticed with an unknown painter by the name of Spinelli. However, his real master was Passarotti. Having received his early training in the Passarottis workshop, Massari, upon the death of his master in 1592, joined the Academmia degli Incamminati, founded by the Carracci. He became particularly attached to Ludovico for many years, and throughout the first decade of the 17th century, Massari worked for Ludovico on various projects in Bologna and elsewhere. Massari was deeply influenced by Ludovicos mannerism, but his early works also show a keen awareness of the archaic classicizing of Annibale, Agostino, and most particularly, their pupil Bartolomeo Cesi. An early work, Massaris Crucifixion in the Oratorio di San Colombano, Bologna (1600), illustrates the spare, almost severe classicizing of form and composition, instilled by Annibale and Agostino that survived so strongly in Cesis own style, and which made it such an effective vehicle to illustrate the more serious doctrines put forward by Counter-Reformation in Bologna.

Between 1604 and 1605, Massari worked with Ludovico on the latters decorative schemes for the octagonal cloister of San Michele in Bosco (Stories of San Mauro, San Benedetto and others). Shortly thereafter, he collaborated with Lionello Spada and Francesco Brizio on fresco decorations for the Palazzo Bonfioli, Bologna (1605), and fresco decorations in the Oratorio della Trinità at Pieve di Cento. In 1610, Massari travelled to Rome under the patronage of Cardinal Facchinetti, and after his aforementioned transitional period in Florence, he returned to Bologna. There, in 1614 he painted one of his masterpieces, the main altarpiece for the church of Santa Maria in Guadi in San Giovanni in Persiceto. Shortly thereafter, Massari travelled with Francesco Albani to Mantua, where he intended to work, but ended up spending so much time hunting, fishing, and enjoying the countryside, that he rather neglected his painting.

Among his most important works are the Sacra Famiglia in the Uffizi, the Ammon and Tamara (c.1615) in Prague, the Deposition in the Museum of Fine Arts, Boston, the Penitent Magdalene in the Museo Civico, Carpi, The Pool of Bathesda, in the Pinacoteca Capitolina, Rome, and his Saint Luke in the Chiesa dei Cappuccini, Rome.